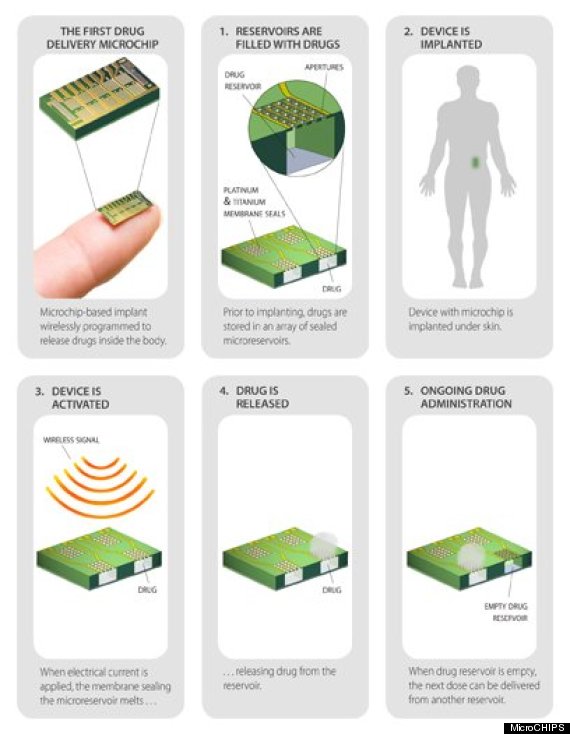 According to the MIT Technology Review, Bill Gates has just given $46 million to the research and development of a micro chip birth control that is to be inserted under the skin. Gates idea is that the chip will release hormones daily to help prevent pregnancy and when ready to conceive, one can use a remote control to turn it off. The only thing now is getting the chip encrypted so it isn’t hacked and getting FDA approval.
I understand that it can be hard to remember to take “the pill” and some of the other methods like IUD’s doesn’t work for everybody, yet I’m not sure that this method is the way to go. We live in a generation that is all about the over usage of electronics such as computers, cell phones and video games. Now we are adding a chip to the mix that must release electric currents through thin seals to melt resevoirs containing the hormones to be released in the body. Maybe its just me, but I can’t help, but wonder if there will be news reports 5 years later saying that electrical waves have caused cancer from the prolonged use of all of the forms above (you know is always something)!
Preliminary testing is suppose to start in 2015 and become available by 2018. Once the chip is inserted, the hormone dosages can be increased/decreased by your doctor and the chip can be stored in the body for up to 16 years at a time. I can tell you now that I certainly will not be standing in line for one of these and I am pretty sure a couple with 19 kids and counting will not be either! 🙂
What do you think about the new contraceptive?
Photo courtesy of MicroCHIPS

The Osbourne's Take on MAC!